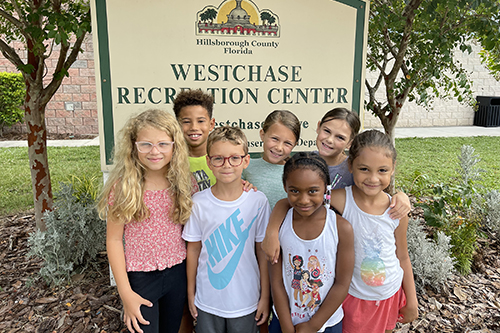 After three years as site supervisor, Vince Bowers is taking on a new role with Hillsborough County Parks and Recreation.

Bowers, who recently welcomed a baby girl, will now be working in the finance department, a role that will allow him to spend more time with his growing family. “It’s a win-win for us,” stated Dona Smith, Recreation Manager for North Hillsborough County.

Smith added that Bowers’ strong background in recreation will serve him well in his new role. “He understands you can’t put a square peg in a round hole,” Smith said. “He also has a great relationship with all of the staff.”

Taking the helm at the Westchase Rec Center is Maria Pirone, a face that will be familiar to long-time patrons. Pirone was a staple at Westchase Rec before the addition of the new gym in 2013. For two years after the expansion, Pirone, Bowers and Smith worked together to grow the center’s programming, including its already robust after-school program, which is now the largest in the county. “She’s amazing,” Smith said. “She’s very patient and nurturing.” Pirone is also a staunch advocate for the Positive Coaching Alliance, a program adopted by the county to incorporate character development into youth sports.

Pirone will be joined by Karlie Mintzer, who has worked as a recreation leader at several area recreation centers. Smith noted that Mintzer’s high energy and passion are the perfect complement to Pirone’s nurturing demeanor. “They will make a great team, the best of both worlds,” Smith said.

That teamwork will serve the Westchase Rec Center well as they work towards a return to normal, not only in their after-school enrollment capacity, but also in their programming for patrons of all ages. Look for an updated list of fall programming in the September issue of the WOW. “If there’s a program you’d like to see, just let us know,” Smith said. “We want to make sure there is something for everyone.”

WOW wishes Vince well in his new role, and extends a warm welcome to Maria and Karlie.