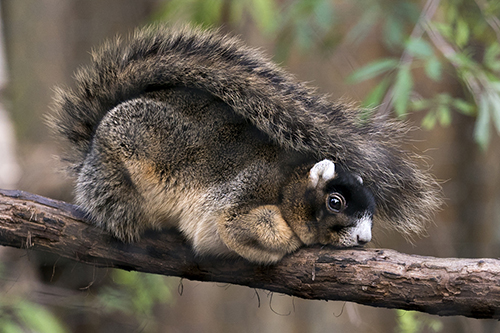 Love them or loath them, squirrels are a part of our everyday life in suburbia.

They scamper by us on our daily walks, dart in front of our cars, chatter at us from the trees, dig annoying holes in our yards and eat the lion’s share of the birdseed in our birdfeeders. But how much do you really know about these critters that share our neighborhoods?

Squirrels are part of the rodent family and there are five varieties that live in the U.S: fox, gray, red, flying and ground. Three of those – fox, gray and flying – can be found in Florida. Each of the five types of squirrel has several subspecies. The squirrels we share our neighborhoods with are of the gray variety – Eastern Gray Squirrels, to be exact.

Those who moved to Florida from the Northeast, areas along the Atlantic coast, as well as much of the West Coast, will find our local gray squirrels a familiar sight. Those who moved from the Midwest, parts of Texas, Colorado and the Dakotas, may find themselves wondering why the squirrels here look so frail. That is because these areas of the country have a large population of the much more substantial fox squirrel.

While the Eastern Gray Squirrel is the predominant squirrel in our area, Hillsborough County is also home to one of the most elusive species of fox squirrel: the Sherman’s Fox Squirrel. One just has to know where to look to find one.

The fox squirrel is actually the largest tree squirrel native to North America. In fact its name was derived due to the fact that they are so large and fluffy, upon first glance they are often mistaken for a fox. Fox squirrels range from 18-29 inches long, not including their tail, which adds another 8-13 inches. By contrast, gray squirrels are just 9-11 inches long, plus a 7-9 inch tail.

There are 10 varieties of fox squirrel. In addition to being the largest of the North American tree squirrels, fox squirrels also have the greatest color variation of any squirrel in the world. The most readily recognized fox squirrel in much of the Midwest and points West has a yellow-brown coat and a reddish-brown underbelly. The Sherman’s Fox Squirrel, by contrast, is characterized by a black colored head and white nose and ears.

The Sherman’s Fox Squirrel, named after esteemed ecologist H. B. Sherman, prefers open areas, like pine flatwoods and oak hammock found in the many nature preserves in our county. Fox squirrels and gray squirrels typically don’t share the same habitat. Fox squirrels spend much of their time on the ground searching for food and prefer woodlands next to openings. Gray squirrels prefer dense stands of trees, especially oaks and hickories, which is why they love our tree-lined streets and dense conservation areas. As is evident when walking through any one of our neighborhoods, gray squirrels are active in the early morning and late afternoon, often feeding on the ground, and they spend much of their lives in trees. They have home territories of a few acres, where they spend their entire lives. It is common for homeowners to have several squirrels living in their yard that share overlapping territories.

Fox squirrels, on the other hand, are active throughout the day and can sometimes be observed foraging for food in pastures or openings adjacent to forested areas. They spend more time on the ground than in trees and, unlike our gray squirrels that tend to scamper up the nearest tree to escape predators; fox squirrels often attempt to escape enemies by running rather than climbing.

Unlike our relatively bold neighborhood squirrels, Sherman’s Fox Squirrels tend to be shy and wary of humans, so it’s key to hike quietly and stay alert if you wish to spot one. When spotted, they hide quickly, which can make it difficult to get a photo. Photo or not, it is worth the search to catch a glimpse of one of these elusive fox squirrels!