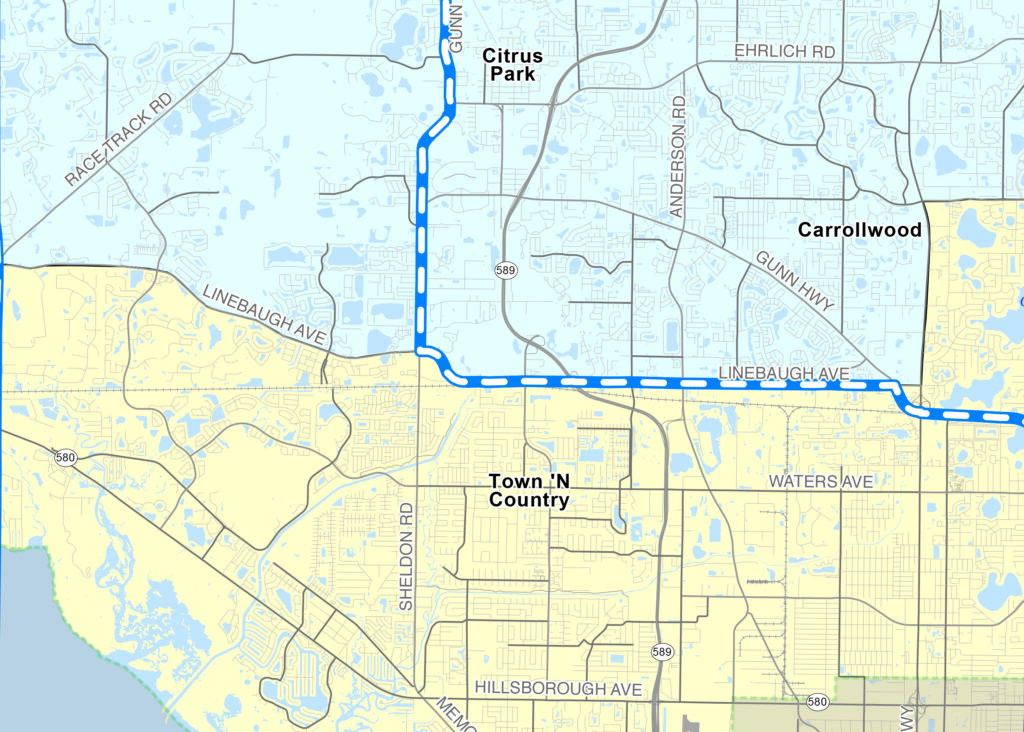 After every census, state and local and state politicians adjust political boundaries for federal, state and county seats to account for population shifts.

The latest maps released by Hillsborough County’s Board of County Commissioners for seats on that body suggest a change may be in store for residents of the Westchase Community Association (WCA) and all neighborhoods to its north.

Every home in Hillsborough County is represented by four county commissioners. Three of the four commissioners—Democrats Mariella Smith, Patricia Kemp and Kimberly Overman—hold county-wide seats representing the entire county. The fourth district representing homeowners is a geographically smaller area whose boundaries can change after the decennial census. Currently the entire Northwest area lies within District 1, served by Harry Cohen, a Democrat. Its local L-shaped boundary runs up Gunn Highway to the Pasco border and along Linebaugh avenue east of the Westchase community. All neighborhoods to its northeast belong to District 2, represented by Republican Ken Hagan.

After a series of September public hearings, three possible redistricting maps were tweaked, shifting the District 1 and District 2 boundaries in ways that would change local representation.

One of the three maps, Map E, Map F or Map G, will likely be approved as the new district boundaries at a Nov. 16 BOCC meeting.

Map E establishes a new boundary running east to west through the Maureen Gauzza Library, keeping Westchase in District 1 but shifting all neighborhoods north of the library into Hagan’s District 2 seat. Map F establishes the east-west running boundary farther south along the CSX railroad line south of West Park Village, Glencliff Park and Woodbay, shifting Westchase and neighborhoods north out of their current district under Cohen and into District 2, held by Hagan.

In a completely new twist, Map G, if adopted, would split Westchase with an east-west boundary running down Linebaugh Avenue. It would send all neighborhoods north of Linebaugh into Hagan’s District 2 seat while keeping all neighborhoods south of Linebaugh in District 1. This would result in the WCA being represented by two different commissioners serving districts smaller than the overall county in addition to the three county-wide commissioners.

In 2010, the WCA Board opposed the same proposed Linebaugh division of Westchase with a BOCC boundary, arguing it would dilute Westchase votes into two districts. Westchase supporters of the proposed 2010 Linebaugh boundary, however, argued that it would allow Westchase the ability to twist the arms of five of the existing seven county commissioners.

The maps will see two additional public hearings for input from county residents on Nov. 8 at 6 p.m. and Nov. 16 at 6 p.m., when a final map is expected to be chosen. Those meetings will be held at the County Center, 601 E. Kennedy Blvd. Tampa, FL 33602.

For more information on how you can participate and weigh in on the process, please visit: https://www.hillsboroughcounty.org/en/government/board-of-county-commissioners/2021-redistricting-in-hillsborough-county.