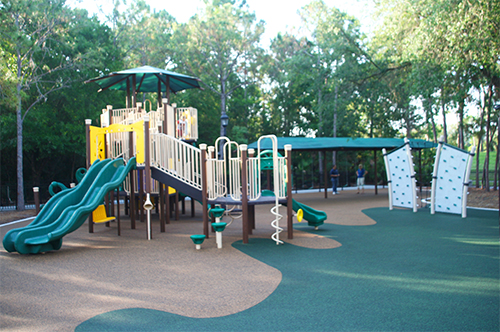 The May 5 meeting of the Westchase Community Development District, held telephonically due to the pandemic, saw supervisors tackle questions about reopening Westchase parks and hear of a setback to their efforts to access a landlocked parcel for a community garden.

CDD Engineer Robert Dvorak told supervisors that he had heard back from TECO about the district’s request for an access easement beneath the high powered lines just to the east of Westchase Elementary (the district’s maintenance facility sits behind the school’s parking lot). Supervisors requested the easement to access a large piece of district-owned land lying between Stonebridge and The Vineyards and behind the large lake. Currently the district has no way to access it due to those neighborhoods’ gated status and the adjacent road to its north being privately owned.

Dvorak stated that TECO was willing to grant an easement and allow a paved road beneath the wires to the parcel but only if the district agreed to restrict the road to CDD staff. CDD Chair Jim Mills observed the restriction obviously upended the board’s plans to create a community garden on the parcel. “Very disappointing to hear that,” said Supervisor Brian Ross, one of the garden’s advocates.

Dvorak estimated that the road to access the parcel would likely cost $100,000, which several supervisors said would only make sense long-term if the parcel could be used by residents as planned. Supervisors ultimately asked District Manager Andy Mendenhall and CDD Attorney Erin McCormick to explore their TECO contacts to ascertain whether a face-to-face meeting with higher TECO administrators once social distancing is relaxed would make a difference.

Supervisors, however, approved moving forward with using the TECO easement for providing electrical service to the parcel to power a well pump and lake nanobubbler.

CDD Attorney Erin McCormick then went over five issues that the cell tower builder had with the district’s lease agreement. Supervisor Brian Ross, who had made several of the requests that the builder cited as hurdles to a final agreement, stated that he didn’t think the issues were insurmountable with different language. McCormick committed to sending the agreement to Ross for changes in the coming week.

McCormick added that Hillsborough County was also concerned about the loss of approximately six spaces in Glencliff Park’s southern lot with the construction of the cell tower and plans for replacing them with additional spots in the north lot. Dvorak said he would be happy to put together an aerial photo or drawing that, with resizing existing parking spots and adding more, would show the plan for replacement spots in the north parking lot.

Clearing up questions about the pole’s aesthetics, the board clarified that it would not add a flag to the pole, which, if it had a flag, would also require lighting. When McCormick asked about the preferred color for the pole, Supervisor Matt Lewis suggested white and Supervisors Greg Chesney and Brian Ross suggested asking the builder to provide a recommendation on a color that would make the pole least obvious.

McCormick also informed supervisors that she was trying to get the district’s traffic control agreement for The Greens on the Hillsborough Board of County Commissioners agenda for May 6 but found it unlikely as the board was only considering agenda items related to the current pandemic emergency. The agreement is needed for the Hillsborough County Sheriff’s Office to enforce traffic laws behind the Greens gates. McCormick said she would continue working to finalize the agreement and added she was waiting for the sheriff to sign the HCSO’s indemnification agreement with the district.

District Manager Andy Mendenhall asked supervisors to approve a draft 2021 budget that would set the upper limits of district spending and assessments to establish the county’s Truth in Millage (TRIM) notices, mailed to property taxpayers each fall. Mendenhall stated that while the overall maintenance and operations portion of the budget remained largely flat, there were some changes to CDD assessments in The Greens and West Park Village.

He noted that the last of the 20-year infrastructure bonds covering the construction of infrastructure in Greenpointe, Village Green and West Park Village were recently paid off, meaning the debt assessment for those neighborhoods would drop off the assessment roles in the coming year, typically lowering their assessments by hundreds of dollars. Previously Greenpointe paid $824 annually. Meanwhile West Park Village’s debt assessments ranged from $400 for West Park townhomes to just over $1,000 for West Park’s and Village Green’s single family homes.

West Park’s neighborhood specific fund, however, saw an increase of about $240 to cover the neighborhood’s recent replacement of signage and street poles, which are unique to that neighborhood. This offset some of the savings West Park homeowners would have seen from the debt assessment elimination.

Under the proposed TRIM budget, The Greens would also see an increase in their neighborhood fund. Over the last few years, homeowners in The Greens, enjoying a surplus in their reserves, were paying less than their annual actual costs for their guardhouse and reserves for roads. With that surplus exhausted, the neighborhood specific fund for The Greens will rise about $65 per home, an increase of about 6 percent over their CDD assessment last year (The total CDD assessment for most Greens homeowners will be $1,140.04). Greenpointe, however, won’t see the increase as it will be offset by $550 decline in their debt assessment.

Citing the economy, however, Supervisor Greg Chesney expressed hope that they could find a way to avoid any increase for The Greens this year, perhaps by pushing the increase off to future years until the economy has recovered. Supervisors ultimately approved the draft budget for TRIM notices 5-0 pending a final review of the Greens neighborhood fund in hope of temporarily eliminating the increase.

The final, official version of the budget will be approved at the CDD’s August meeting.

Touching on the reopening of Baybridge and Glencliff Parks’ playgrounds and basketball courts, supervisors agreed to follow Hillsborough County’s park plan and reopen them when the county also reopens its playgrounds. Field Manager Doug Mays stated that some Glencliff residents had complained about cars parking on their road outside the locked parking lot from folks using the park fields. Mays said he was monitoring the situation and had not found any time where thru-traffic was impeded. Supervisors, however, declined to open the Glencliff Parking lot out of concern it would give the wrong impression the Glencliff playground was open.

Supervisors unanimously agreed to publicly notice their landscaping bid. It will begin with a prequalification period where companies interested in bidding will be first screened to ensure they have the resources and experience to handle and accurately bid the job. Field Manager Doug Mays said the bid specifications had been amended to include some expanded areas but the replacement of annuals at the community’s intersections was pulled out of the specifications and that work will be bid separately.

In other actions, supervisors addressed a Harbor Links resident complaint that another homeowner had invited a food truck into the neighborhood. Supervisors agreed that the food truck was the homeowner’s invitee and, if anything, it was a matter for the Westchase Community Association to address rather than the district.

Citing the desire not to create a precedent for approving temporary signage, supervisors declined to give their blessing to signs celebrating graduating seniors on district property.

Tackling a resident’s suggestion that ponds be posted with signs warning of alligators, supervisors authorized staff to install warnings on pond banks close to walkways and paths.

Citing a lack of nearby potable water, supervisors took no action on Supervisor Matt Lewis’ request that they consider installing a fountain near the Radcliffe pedestrian bridge.

Asked by CDD Chair Jim Mills about hurricane season preparations, staff stated that all hurricane supplies were on hand and the district’s truck and wood chipper used for fallen trees were in working order.