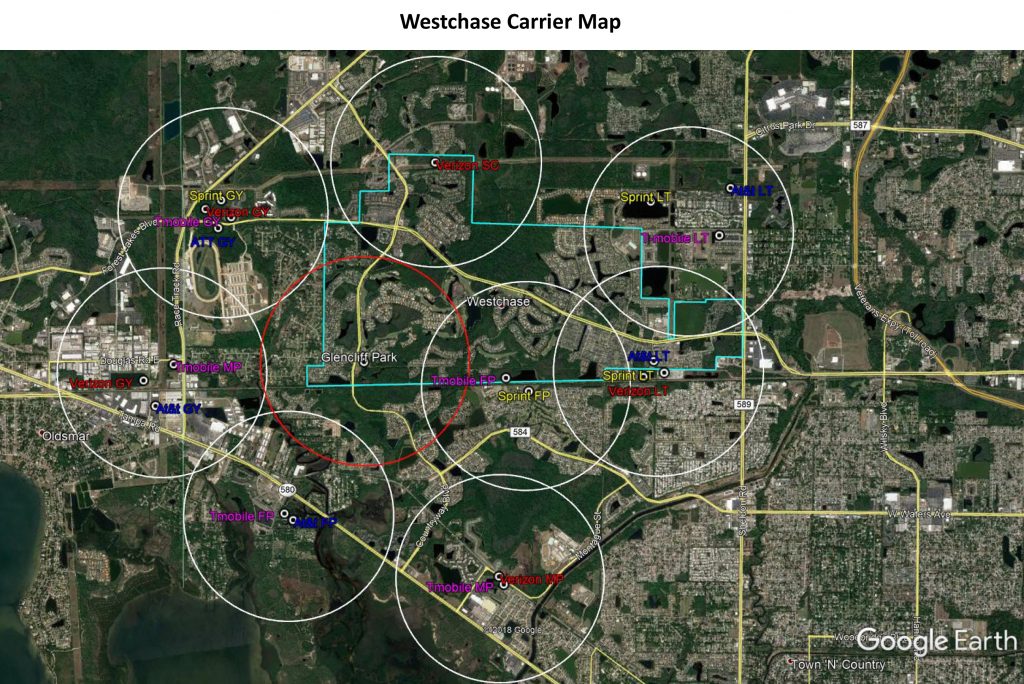 Nineteen residents of Westchase attended a Westchase Community Development District (CDD)-hosted public meeting to hear a presentation and offer feedback on a proposed cell tower for the southern edge of Glencliff Park.

While a number of residents present asked questions, only five expressed clear sentiments for or against the tower, with three speaking out in favor and two appearing opposed.

Making the presentation was Alan Ruiz of Vertex, the company the CDD has chosen to potentially sign a lease agreement for the park site, which is owned by the CDD.

Ruiz began by giving an overview of the tower, which will rise 150 feet from a site that will overlay the last three north and south parking spots in the park’s southern lot. The 2,500 fenced area will hold the tower and space for up to four carriers’ equipment. While stating he is open to changes, Ruiz’s conceptual images showed the area screened by an eight-foot white vinyl fence and landscaping.

CDD Supervisor Matt Lewis, who has represented the board in its discussions with Ruiz and their consultant, Steel in the Air, stated the lease agreement would include a provision to try to add four to six of the lost parking spots adjacent to the northern parking lot.

When asked what the district would do with the money earned from the lease, CDD Supervisor Greg Chesney stated it would go into the district’s general fund, lowering property owners’ assessments. He added, however, that the annual amount was an insignificant part of the district’s budget and the district undertook the project to improve cell service along Countryway Boulevard rather than for the financial incentive.

Ruiz stated that his company had hired another company to erect a 150-foot-tall balloon in the tower’s proposed location and then take photos of it from six different vantage points to show the tower’s visibility. He stated, however, he was unhappy with the company’s choice of views, as they all seemed to take advantage of tree cover. While Ruiz said that most areas of the community would not see much of the tower because of homes and trees, he acknowledged it would be visible in spots. He stated he planned to have the company return and put the large red balloon up again and then notify the community so residents could get a fairer idea of its visibility from their properties and neighborhoods.

Addressing a question of why the tower couldn’t be tucked farther back into the woods, Ruiz stated nearly all of the trees around the park were in protected wetlands, off limits to the tower.

When Bridges resident Linda Ryan inquired about health concerns, Ruiz stated that fears of cancer from the tower’s radiation typically prompted concerns. He responded, unlike x-rays or UV rays, which are ionizing radiation that damages DNA in cells, cell towers emit non-ionizing radiation on the other side of the spectrum that doesn’t damage cells. He said cell tower signals were closer to microwaves. When Ryan responded that microwaves also posed a health threat, Ruiz stated that there were no conclusive links to cancer from cell towers. While Ruiz acknowledged anyone could find plenty of alarming information on the Internet, he offered links to the Federal Communications Commission (FCC), the American Cancer Society and the World Health Organization that provide an overview of scientific studies that found the use of cell towers and cell phones did not endangering health. He added that offering better cell signals in the dead zone would actually reduce the amount of radiation emitted from cell phones searching for the nearest cell tower’s signal.

He added that the tower has a range of a half to three-quarters of a mile (or two miles total in diameter) and provided a map of existing towers showing the coverage gaps that the Glencliff Park tower and a second macro-tower near the library would fill. Answering Linda Ippolito’s question about whether just the library tower might make the Glencliff Park tower unnecessary, Ruiz stated their small coverage zones wouldn’t overlap, making both towers necessary.

Addressing appearance and color questions regarding the fence and tower colors, Ruiz said that he was open to the community’s preferences.

Two Glencliff residents concluded comments, with the first stating he had to go out onto his lanai to make a phone call. “It is desperately needed.”

Glencliff’s Ken Blair concurred, saying that the Glencliff neighborhood needed the tower. “We have no service whatsoever at all.”

CDD Chair Jim Mills observed that the district started exploring the idea only after about two dozen Glencliff homeowners signed a petition asking for a tower to be put in the adjacent park.
Ruiz mentioned that completing the tower would take 12-15 months after the CDD signs a leasing agreement. CDD Attorney Erin McCormick stated that the district would keep the comment period regarding the tower open for 20 days after the meeting.

CDD Chair Jim Mills committed that CDD board members would take no formal action to approve the lease until after completion of the comment period, making April 7 the earliest the board could vote to approve the Vertex lease.

“This has been pretty methodically walked through,” said Mills, stating the tower has been discussed by the board for over a year. He added the board would vote when the lease agreement was finalized. He added, “It’s 2020. We ought to have the technology that is available.”

McCormick closed by stating residents could still submit comments to either her or District Manager Andy Mendenhall using the contact information below: