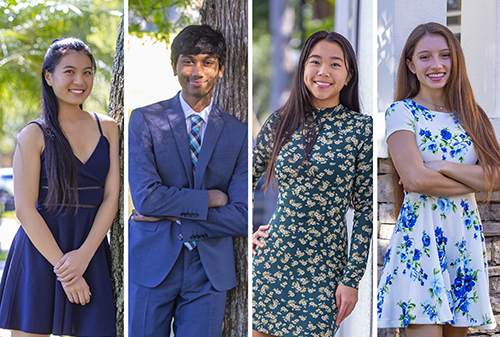 The 2020 WOW Sylvester Scholars, young men and women dedicated to both scholarship and community service, aim to make a profound impact on their community and world.

They include a dedicated skateboarder, a National Merit Scholar soccer playing midfielder, a black belt pianist and a figure skater who raised funds to travel to Sri Lanka to establish an international tutoring program for orphaned girls.

Mikaela Kwan, the daughter of Christine and Kevin Kwan of The Vineyards, graduated from Alonso High School with a perfect 4.0 unweighted GPA and a 6.64 weighted GPA. She will attend University of Central Florida and major in international business. Kwan completed nearly 600 hours of community service during high school.

Kwan’s personal essay bravely discussed her battles with depression and the importance of leaning on others for help. “My ninth grade year, I found myself uninterested in anything around me. I lost touch with my friends and family, and…nothing brought me happiness-or even offered me a distraction from my dark emotions,” she wrote. She missed a half month of school. “Even when I did start attending again, it took several weeks to work back up to attending the full eight-period day. However, with my work ethic, grit, resilience, and the overwhelming support surrounding me, I emerged my freshman year with a 4.0 GPA and a five on my AP Human Geography exam.”

Kwan added, “I continue to experience bouts of dark emotions, but now, I know how to manage the stress of being a young adult about to enter college…I still am afraid of how my life may unfold and what my experiences will bring me, but I am confident that I will be able to prevail over the obstacles that I face and find success in my passions and abilities.”
Lori Smart, one of her recommenders, wrote, “Mikaela is an amazing young woman with tremendous potential. She is mature beyond her years and has proven herself to be a natural born leader and mentor.”

Much of Kwan’s volunteer work was with the Humane Society of Tampa Bay, where she walked and helped socialize dogs and cats and fostered a number of different animals. Kwan also volunteered with Moffitt Cancer Center and tutored with Alonso’s Saturday Success Academy.

Kwan also volunteered for Boards for Bros/Girls’ Skate Clinic, where she taught underprivileged youth how to skateboard and build skateboards. “I help to teach and encourage girls who are new to skateboarding, as the sport is male-dominated,” she wrote. “Female empowerment in skateboarding is difficult, but nonetheless rewarding.”

Kwan was a member of Alonso’s National Honor Society and Beta Club, participated in Future Farmers of America her first two years, served as a Raven Ambassador for three and joined the Art Club for one year.

Citing her work ethic, dedication, attitude and willingness to help other students, Karina Bletsch, Alonso’s AP Chemistry Teacher, said, “”Students like Mikaela Kwan are rare and they leave a lasting impression. She has challenged me and I truly feel that our interaction has made me a better teacher. She will be missed by students, teachers, coaches and administration at Alonso.”

Rohan Nadgir, the son of Ravishankar and Purnima of Kingsford, graduated from Robinson High School’s IB Program, with a 3.8 unweighted GPA and a 7.4 weighted GPA. He plans to study environmental engineering at University of Florida.

A National Merit Scholar and AP Scholar with Distinction, Nadgir also notched fifth and seventh place (out of 100) finishes with his Math Bowl teams. Creating Robinson’s first competing team in the Florida National Ocean Science Bowl, he attended state competitions for Florida Business Leaders of America, where he was named the Broadcast Journalism Winner. He was a runner up in the Florida Envirothon Current Event competition.

Nadgir was a central midfielder for Tampa Bay United Soccer as well as Robinson’s second chair violist, named to All County Orchestra. He also served as president and founder of Robinson’s Speech and Debate Club, secretary of the school’s Robotics Club and captain of Mu Alpha Theta’s Geometry Team.

Nadgir’s personal essay explained how he was inspired to become an environmental engineer. “In my sophomore year, I had signed up for lots of clubs and activities that I really didn’t have any real interest in. At the end of that year, I…wanted to try something new.”

He found new inspiration from Sweetwater Organic Form, just 15 minutes away. “Each day posed a new challenge to solve, like creating a chicken pen while avoiding the rusty nails, digging up the soil to unexpectedly find sweet potatoes and grabbing earthworms and putting them in the compost bin.”

He added, “The farm has also sparked a proud environmentalist in me, making me actively look for volunteering options such as cleaning up Tampa’s beaches and planting Juncus in estuaries.”

Describing Nadgir as a responsible, kind and bright young man, Robinson IB School Counselor Daniel Driscoll stated, “Rohan has consistently challenged himself by taking upper level IB courses and rigorous courses even by IB standards.” Citing Nadgir’s dedication to helping the environment and the needy, Driscoll added, “Much of his community service aligns with his goal to become an environmental engineer, where he will continue to serve those around him and help them live in a better world.”

Jennell Wiest Peteranecz, Nadgir’s IB English 4 Teacher, described Rohan as an exceptional, engaged and funny student who is aware of global and local issues. “Few students at Robinson’s IB program engage life and academics with the joie de vivre that Rohan possesses and attaches to everything he does.” She added, “Fewer still have the optimism and curiosity that Rohan has.”

Alexandra Politowicz, the daughter of Rosario Espinoza of West Park Village and Kurt Politowicz of Hampton Chase, graduated from Berkeley Preparatory School with a 4.0 GPA and a transcript replete with honors and Advanced Placement courses (Berkeley does not offer a weighted GPA.) She plans to study molecular biology at Princeton University.
Politowicz completed over 270 hours of community service with the bulk of the hours earned during a service trip to Costa Rica, where she tackled a variety of sustainability and service projects. She also taught chemistry to underprivileged middle schoolers and worked for Days for Girls St. Pete and Days for Girls Tampa Team/International, where she helped develop kits consisting of reusable, sewn products to help girls in Africa and Guatemala manage their menstrual cycles so they could stay in school. “I received the 50th Anniversary Service Scholar Award from my school and a grant to help fund my project, which I used to purchase materials as well as launch a fundraising project the next two months,” she wrote on her scholarship application. “Last August, I traveled to Guatemala with my mom to personally deliver the kits as well as help to give vital health education clinics to girls and young women…to keep them safe, help them earn better jobs, and lift them out of poverty.”

A National Merit Semi-Finalist and an AP Scholar with Distinction, Politowicz was a member of five different honor societies at Berkeley and won Tampa’s Athena Society 2019 Dr. Sylvia Richardson Young Woman of Promise Award and the University of Rochester Frederick Douglass and Susan B. Anthony Award.

A pianist with a Second Degree Black Belt in ATA Taekwondo, Politowicz served as a Berkeley prefect, a student library proctor and a youth leader and ambassador for Tony Robbins Global Youth Leadership Summit. She participated on Berkeley’s Varsity Rowing Team and was treasurer of the school’s Chinese Club while also serving as a science and writing tutor.

“Alexandra…has endless amounts of energy, a winsome smile, a problem-solving mind and heart that genuinely cares for the welfare of small animals, exotic animals and every human she encounters or reads about who is in need,” stated her AP Biology and Microbiology Teacher Martha DeWeese. Stating Politowicz had great promise and an adventurous spirit, she added, “She is humble, compassionate and driven with a desire to make a positive difference in the lives of others.”

The daughter of Tammy and Tai Huynh of Castleford, Kayla Huynh graduated from Robinson High School’s International Baccalaureate (IB) with a 4.0 unweighted GPA and a 7.16 weighted GPA. She plans to attend Emory University, where she will major in Biology.

Huynh completed over 500 community service hours with the majority in the surgery waiting room at Mease Countryside Hospital as a liaison between families and the medical team. In addition to giving tours of her school to prospective students as a Robinson IB Ambassador, Huynh accumulated more than 120 service hours teaching English to students in Sri Lanka. “I raised $3,000 for and then visited Grace Girls Home in Sri Lanka,” she stated. “Together with a friend, I helped develop a curriculum to teach the orphaned girls English and still continue lessons via Skype with a group of students from around the U.S.”

She added, “This trip turned out to be one of the most influential things I have ever done. It opened my mind and allowed me to see the privileges that I often take for granted, from things that seem as ordinary as air conditioning, to things as big as the love and support a parent. It allowed me to realize how much I really didn’t know and how much more there is in the world to learn.”

A competitive figure skater who has won numerous ISI and USFSA competitions, Huynh is also a pianist and a violinist who played on stage with The Piano Guys when their tour
brought them to Tampa.

In addition to being AP Statistics Team Captain, training students for the AP Statistics exam, and a member of the Mu Alpha Theta Math Honor society, Huynh participated in the Interharmony International Music Festival in Italy during the 2019 summer. There she played in an orchestra of musicians from around the world.

Describing Huynh’s academic career as outstanding, her Robinson AP English and AP English Language and Composition teacher, Susan DiFederico, stated, “Her efficient and responsible approach to life allows her to study, compete, aid and grow as a young woman.” She added, “Motivated would be one of the strongest adjectives I can apply to Kayla. Her kind heart and talented mind are an amazing combination that will serve her well in the future.”

It’s easy to see how WOW’s 2020 class of Sylvester Scholars so greatly impressed the WOW Board of Directors. “This year’s Sylvester Scholars represent the best of Westchase,” said WOW President Jon Stein. “They have demonstrated a commitment to bettering our communities and to academic excellence. We congratulate these scholars on their achievements and look forward to their continued success and community leadership in years to come.”