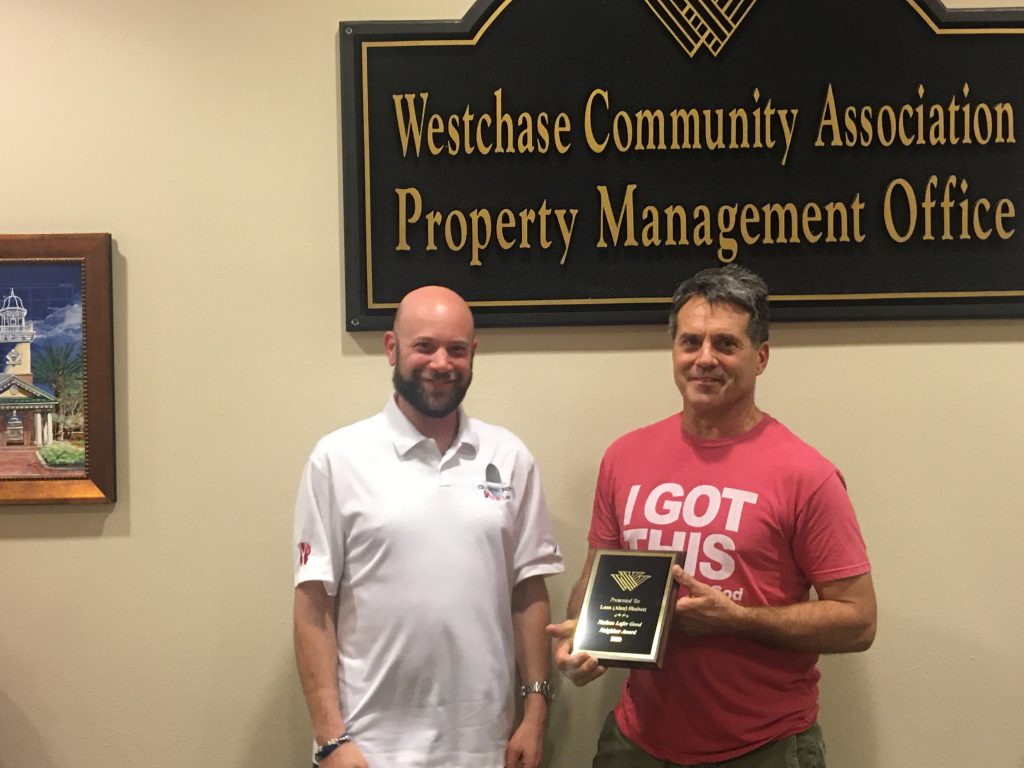 Established in 2006 the award is given to Westchase residents who has helped and volunteered in the community to improve the quality of life in Westchase. Shabott helped to save the Westchase Santa parade this year. The firetruck typically used for the parade was sold in 2019 and parade organizers found out the morning of the parade that the firetruck they were scheduled to use instead was not going to be available. Shabott had bought a sleigh to renovate for the 2020 parade but once he learned that the firetruck was not going to be available, he kicked the renovations into high gear and had the sleigh ready for Santa in four hours.

Directors also agreed to continue early bird swim hours for swimmers despite lagging attendance over the past few months. Facilities Manager Kelly Shires said that he had originally placed the review of the program on the agenda because he did not think he was going to have the staff to cover the morning shifts but that he had lifeguards who had volunteered and so that was no longer a problem. While attendance for the programs has dropped off since October, directors conceded that could be due to cooler, winter temperatures and holidays and agreed to table the review of the program until their June meeting. The pool at the Swim and Tennis Center on Countryway is open for Master Swim from 5–7 a.m. Monday, Wednesday and Friday. It opens for early swim Monday, Wednesday, Friday and Saturday at 7 a.m. Shires said he had hired a coach from Pipeline Swimming who would be available during Master Swim to help swimmers with technique.

WCA Director Ruben Collazo had some issues with WOW Board Member Heather Greeley-Hessefort’s appointments for the open seats on the WOW board. Collazo made a motion to table her appointments until the next WCA meeting because he was disappointed more people had not applied. He said he would like to take another month or two to recruit more people to apply. Greeley-Hessefort disagreed, “I think we have two great people coming back to the board and a great new addition in Tony. There may not have been a lot of people, but they are the right people.” She went on to say that she thought it was promoted well.

Radcliffe resident Jim Wimsatt agreed with her, “I saw it on Facebook and other places multiple times.”

Greeley-Hessefort said in addition to promoting the open spots on Facebook, she had sent information to the voting members. Director Dale Sells said, “I think it is indicative of what you see a lot. It is hard to get people to run. I agree Heather did a good job. There was plenty of time for people to apply.”

Government Affairs Committee Chair Rick Goldstein said that he thought WOW Publisher Chris Barrett’s attempt to set up a meeting between WCA board members and Hillsborough County School Board Member Steve Cona and Former Tampa City Council Member Harry Cohen, who will be running for the District 1 Hillsborough County Commission seat in this year’s election, could have ramifications for WOW’s 501C3 status since nonprofits were not supposed to advocate for any politicians. Board President Shawn Yesner asked why Goldstein was concerned with WOW’s tax status and said he thought that was more of a concern for the WOW board. When Goldstein pressed that he thought there was reason for concern, Yesner replied, “You didn’t start raising issues until we responded, ‘yes,’ to a date you could not attend. We didn’t mean to squeeze you out.”

Goldstein responded, “I’m trying to tell you that this is highly inappropriate and we should not be involved and calling attention to Heather that the WOW board may want to look into it as they may lose their 501C3 status.”

Yesner said he had talked to legal counsel who said it was okay to meet with politicians as long as the WCA does not come out in support of one candidate over the other and that he thought the reason for the meeting was to meet to tell them issues that may affect Westchase. All board members voted in favor of proceeding with the meeting as long as there is a very formalized agenda and it is very apolitical.

In response to the discussion, Barrett said, “I spoke to Shawn Yesner this morning, who made clear to me that he didn’t think there was anything inappropriate or wrong. My board email stated I was not trying to cultivate backers for their campaigns but trying to establish relationships that could possibly pay off for Westchase long-term. I think building such relationships is in the interest of all of Westchase.”