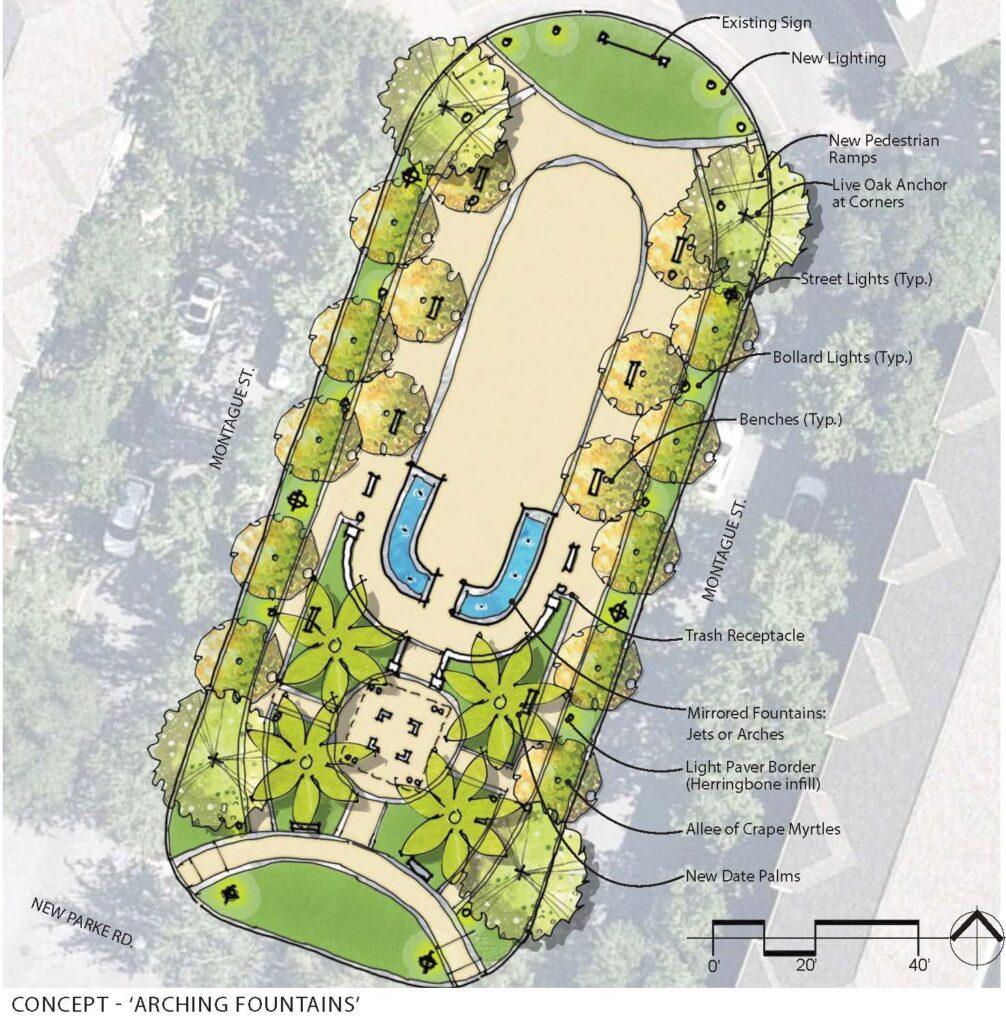 The CDD board welcomed Ivy Clinton of VHB Architects to their Oct. 18 Workshop. Clinton was on hand to present conceptual designs for the renovation of West Park Village Plaza. During the presentation, she went over the purpose of the renovations, gave a review of the existing conditions and limitations of the area, and finally proposed two conceptual designs to the board.

In her overview, Clinton identified a number of areas that would benefit from improvements and modernization. She noted that, like much of the community, the plaza has suffered pavement upheaval and is also home to many mature trees that have perhaps come to the end of their useful lifespan; the bell tower is in need of some maintenance; the brickwork is showing its age and requires repointing; there are significant drainage issues; the fountain needs extensive repair or replacement; and the entrance sign currently gets lost and should be bolder.

Aside from these necessary improvements, she recognized that several features such as the bell tower and curved brick walls are great assets and should not need too much work in order to give them a new lifespan. Clinton suggested that a key feature to consider would be the fountain, adding that the best option aesthetically and financially might be to replace it with a new, modern installation. New fountains can be expensive, and this would be a critical part of the board’s decision making. Recognizing the importance of the plaza as an iconic space within the community, Clinton wanted the design to keep that “wow factor.”

When Clinton opened the floor for comments, Supervisor Brian Ross identified that the constant challenge for the community had been determining the purpose of the space and what would be the best use of the area going forward. He thanked Clinton for recognizing that the plaza was an iconic space within the community and agreed we should be sure that the design keeps that “wow factor.”

Both concepts aimed to open up the space and make the bell tower a stronger feature of the plaza. The board strongly favored the first concept with its modern curved fountain allowing the bell tower to be the central focus. Pockets of secluded seating would be added in the green spaces bordering the plaza. The fountains flanking the bell tower would allow the option of creative water displays, such as arched jets that would create a tunnel effect. There could also be an option to create seasonal light displays in the water. The open space would allow for a broader range of activities to be hosted in the space, hopefully supported by local businesses. Supervisor Ross agreed that this concept definitely embraced the “high standards” held by the board and the community as a whole.

In addition to aesthetic improvements, the redesign would accommodate practical issues as well. Trees would be planted using a paver tray system, maximizing the space while allowing the trees to thrive. Improvements to security cameras, Wi-Fi and electronic outlets will also be considered during the planning process.

With the concept in place, the next step will be a deep dive into refining the concept and preparing an opinion of probable cost. The board will bring in other experts such as a civil engineer and a professional arborist. Next would be interaction with the county to apply for the necessary planning permits. If it is viewed as a renovation project, the county could expedite this process. And finally, construction – Clinton assured the board that this could be phased so as to not collide with key community events during the year. She was optimistic that the work should be able to be accomplished within the curb of the plaza, without having to go into the main road, and as such minimizing any inconvenience to residents.

Residents are encouraged to attend the next CDD Board Meeting on Tues, Nov. 1 at 4 p.m. at the Maureen B. Gauzza Library. Clinton will be on hand to discuss the refinement of the conceptual design. If you have any comments or questions prior to the meeting, those can be emailed to the CDD office at CDD@westchasecdd.com.