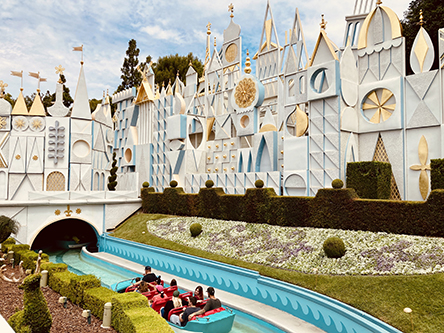 What does a Disney-loving Florida family do as a final hurrah before the last kid flies the nest?

They board a plane and fly 2,504 miles to visit Disneyland.

I mean, that makes sense, right? We had always wanted to see the original park in person and two of the four of us had never been to California, so, why not? We spent two days of our eight-day trip exploring every square inch of Disneyland and below is what we learned for anyone who has ever wondered:

Disneyland is much (much) smaller

We truly were able to cover every square inch of these parks in two days (two very loooong days). That is because Disneyland only has two parks (as opposed to Disney World’s four): Disneyland, which is a more compact version of Magic Kingdom, and California Adventure, which is Hollywood Studios on steroids. Disneyland’s two parks are located in the heart of  Anaheim and cover just 500 acres. Disney World is basically its own city and spans over 40 square miles.

When I say Disneyland is in the heart of Anaheim, I mean you are walking down South Harbor Boulevard, you pass a hotel, a CVS, a Walgreens, and then, boom, you’re at the entrance of Disneyland.  Disney World, on the other hand, requires roughly 10 modes of transportation to get you to the actual park, which does make it seem a bit more of a vacation destination rather than a side stop after grabbing a bite to eat at Tony Roma’s (that’s across the street from Disneyland). The perk of Disneyland’s location is that you can book a nearby hotel and walk to the park (and walk back mid-day for a break).

It’s like entering an alternate Disney Universe. The first thing you’ll notice when walking down Main Street is that you’re staring at a totally different, smaller castle. It’s Sleeping Beauty’s Castle, which is beautiful but doesn’t quite have the grandeur of Cinderella’s Castle. The park itself is condensed, so it seems quite crowded even with fewer visitors. Because Disneyland was Walt’s first park (it opened July 17, 1955, 16 years before Disney World), he hadn’t quite mastered the art of the Disney ride queue. We had great luck using the Disney Genie+ service, so we didn’t have to wait too long in most lines, but for those rides that didn’t accept Genie+, the wait was excruciating because the line was BORING and cramped (I’m looking at you, Space Mountain).

In other words, for regulars to Disney World’s Magic Kingdom, walking around Disneyland is a bit surreal.

Even the rides that are the same are different

Disneyland has a lot of the same rides as Disney World…but they’re different. The Haunted Mansion, for instance, is in New Orleans Square, as opposed to Liberty Square in Disney World, and the facade is, well, more of a southern mansion than a creepy haunted house. The ride itself is a bit different, taking you beyond the graveyard to see how the grim, grinning ghosts are living it up in the afterlife. The same holds true for several other rides: Pirates of the Caribbean is also in New Orleans Square and has a slightly different vibe than Disney World’s version in Adventureland, there’s an explosion at the end of Thunder Mountain Railroad, and Space Mountain (even though the line was a drag) is somehow a bit more exhilarating. The differences are sometimes subtle, but they are there.

Disneyland has also held on to some old favorites, like Mr. Toad’s Wild Ride and Snow White’s Enchanted Wish (which was Snow White’s Scary Adventure at Disney World before they sold out and turned it over to the princesses). And they have some unique rides of their own, like the Matterhorn Bobsleds and Indiana Jones Adventure. The one land in Disneyland that felt exactly the same was Star Wars: Galaxy’s Edge, which was just as awesome as the one in Disney World.

Disney’s California Adventure has quite a few unique rides that you won’t find at Disney World, including a massive roller coaster (the Incredicoaster), a giant Ferris Wheel, more Midway-style rides, the super fun Radiator Springs Racers and, my personal favorite, WEB SLINGERS: A Spider-Man Adventure where literally use your Spidey hands to sling webs.

As I mentioned earlier, Disney’s California Adventure is Hollywood Studios on steroids. The entry is the same. Walking down the main street (Buena Vista Street), gives off that same Hollywood vibe as Hollywood Studios, but the similarities stop there. This park is one part Tinseltown, one part boardwalk-style amusement park (Pixar Pier), one part complete immersion into a Pixar movie (Cars Land), one part San Francisco (Pacific Wharf) and one part superhero action movie (Avengers Campus). That’s a lot of parts! The theming at this park is out of this world. Walking through Cars Land felt like we were dropped into the heart of Radiator Springs and meeting real-life Marvel heroes (ok, well, aspiring actors dressed as superheroes) was a thrill for my favorite 18, 20 and 48-year-old Marvel fans. It was definitely a park unlike any park we have here in Florida.

Disneyland and Disney’s California Adventure were both amazing and fun to visit, but there was something missing: that Disney Magic. This park gives off the vibe of a local attraction, not a global destination for fans of all-things Disney. The staff was great, but not in that over-the-top, I’ve-been-waiting-my-whole-life-to-work-at-Disney sense that you get at Disney World. (I’m not saying the staff should go over the top to please the guests. That’s a whole other debate. It just seems like the die-hard Disney fans must head to Florida to work.)

As I mentioned earlier, part of the missing vibe goes back to size and location. A trip to Disney World, even for locals, takes a bit of a journey to get into the park. (I mean, we didn’t even ride the monorail at Disneyland because we forgot.) And that, too, is all part of the Disney experience.

Another issue is you really feel the void of the experiences you get at Epcot and Animal Kingdom. There’s nothing comparable at the California parks.

Disneyland is where it all began

Having said all of that, Disneyland is where Walt first brought the magic of Disney to life. Disneyland is packed with nostalgia. It is home to the very first animatronic (Abraham Lincoln in “Great Moments with Mr. Lincoln.”) Disneyland’s It’s a Small World was originally built for the 1964 World’s Fair and that ride, including its breathtaking facade, is what you will still experience today. And on Main Street, just above the Fire Station, is Walt’s original apartment he had built on the property. If you look up at night, you’ll see the light they leave on for him.

In the end, for our Disney-loving family, it was completely worth the trek to see Disneyland for ourselves and compare the two parks. As a mom sending her boys off into the world, it’s a memory I’ll cherish for a lifetime. Thanks, Walt!